In a previous post, I opined on the virtues of having every code change be reviewed before it gets deployed to production. That was almost two years ago! Our development team at Khan Academy has grown a lot since then, and I believe even more strongly now that mandatory code reviews are an indispensable tool for creating and maintaining quality code. Code reviews are awesome! I'm not the only one who thinks so. And for more "best practices" advice, this article is spot-on and definitely worth a read. However, there's a nuance to code reviews that I haven't seen much discussion of. 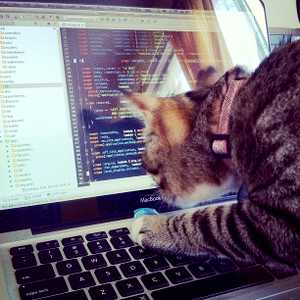 My trick? Naming variables laser_pointer and ball_of_yarn to hold the reviewer's attention.

To provide some context for what follows, here is my process when writing code. I may spend a while at the outset thinking about how I want to solve a particular problem, or researching the problem and possible solutions. Then I write some code - it may be a new API call, or some UI changes, or a background task. I spend no more than a day coding before sending a review. I can send the review to anyone on the team, but I prefer those who know most about the area of the code I'm working in. In the commit message I explain what motivates the change, any important information that isn't already in the comments, and what work remains (if any) before shipping the change. If the change is not yet shippable then there will be TODO comments in the code highlighting what still needs to be done. Since reviewers have other tasks, I don't expect to get the review back for a day or two, during which time I do more thinking/research or switch to another task. I respond to each and every comment (even if I choose not to change any code) and when everything is addressed I push my local branch and close the review.

In my original post I did mention some challenges when reviewing large new systems or gargantuan refactor projects. The reason these are difficult is that for many programmers the instinct is to want to see something in a working state as soon as possible, which means writing lots of code quickly across the entire codebase (database, API calls, frontend infrastructure, UI) and then fleshing it out with additional logic, documentation and tests later. This is fine for prototypes, but for code that's meant to be shipped it's really counterproductive.

With more and more complex systems, it becomes critically important to involve reviewers in the process as early as possible. Here is an example of all the steps you might take on the path toward completing a new feature in a web application:

Not everyone codes this way, but the advantage this has is that each step builds on the previous step. The reason is that the way you structure your datastore models or the way you design your API has huge implications for the rest of the code - how many AJAX calls the client needs to send, for instance, or how things can be cached. In contrast, the CSS styles you use in your UI have basically no effects on anything else, which means if you make a mistake at this point it is much easier to fix. Getting the architecture right is by far the most important part of the project and should rightfully take the bulk of the time.

There are two direct consequences of this phenomenon: It matters a lot who reviews architectural changes, and "architectural" code reviews proceed very differently from "implementation" code reviews. Both reviewer and reviewee should be on the same page as to what kind of review is being done.

Let's look at two superficially similar real-world code changes and the kinds of comments a reviewer might submit for each one: 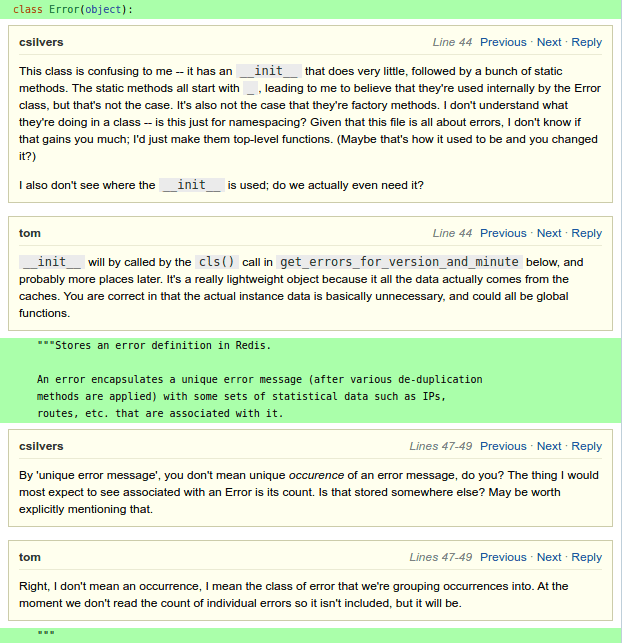 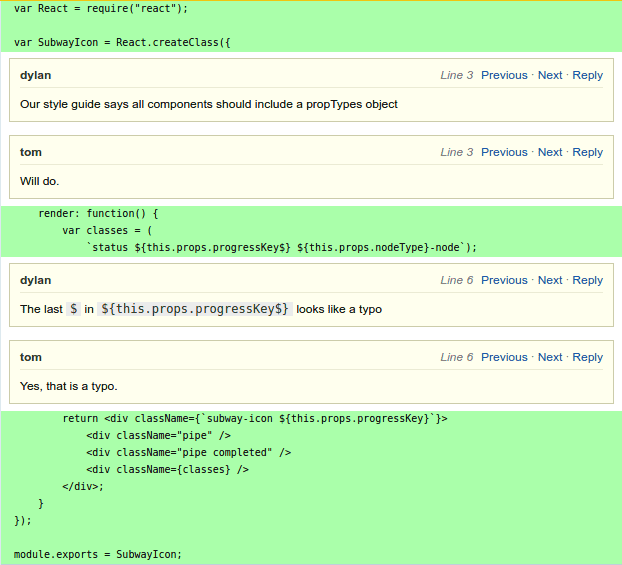 In both cases something new is being added - in the first case a database model for an Error in an error monitor, and in the second a new React UI component. This may be a bit of a contrived example, but it conveys the difference in the tone and content of the comments.

In the architecture review (the first case), new infrastructure is being put in that will have implications for performance and affect all the other code that will be written on top of it. Furthermore, it's early on in the project so changes will be much harder to make later in the process. So naturally you see conversation about what solution is best. There is a lot of emphasis on documentation and code cleanliness so that readers who want to build on this can easily understand how it works. And related to that, it's crucial to establish conceptual clarity about what is being built. Bugs will get called out too (this code is expected to ship after all) but since most of the business logic hasn't yet been introduced, the emphasis is really on the overall architecture.

Note the difference between an architecture review and a review of the design of the architecture. It is well worth involving reviewers in your thinking when you sketch out these ideas, but this is the first actual, shippable code that conveys the final architecture and the concreteness always make new problems suddenly apparent! Don't assume that because your reviewer approved a written design doc, they won't have a lot of feedback or get inspired by new ideas when looking at the actual code.

In the implementation review (the second case) the functionality required is very clear. In this case the markup already existed in another template and was refactored into a new component. Not only that, but we already have many existing components similar to this one (the first few of which were hashed out in great detail in what were essentially architecture reviews) so I'm not expecting any comments on the structure of the new code. This is closer to how most programmers conceive of a code review, which is meant to catch bugs, suggest algorithmic improvements, and enforce style conventions. It's less of a conversation and more of a checklist.

Another key difference: if a reviewer makes a suggestion on an implementation review, I may decide to ignore it if I disagree - as professionals we may offer suggestions but (style violations aside) we respect that at the end of the day the author is the one responsible for the code. In an architecture review, I have to take suggestions seriously because more often than not other developers will at some point have to work on or extend my code. If I disagree, it's my responsibility to bring the reviewer around to my point of view, and then document that reasoning process so that future developers understand why it was done this way.

This is why it feels so disappointing to submit a review expecting feedback on the architectural changes and instead get feedback only on your typos. The best way to avoid that is to pass along not just the code to be reviewed but a description of what you the author expect from the review.

In an architecture review:

This is my first pass at the database models for the new error monitor. The use cases are described in the comments. I wasn't quite sure how to divide up the files - what do you think? Does this look like it will be performant and maintainable in the long term?

In an implementation review:

This is the completed error monitor UI. I've addressed all the TODO's and tested thoroughly. Attached are a few screenshots. I'd like to ship this on Monday to the dev team.

I hope that understanding the difference between these two types of reviews - architecture and implementation - helps you communicate better with your teammates when reviewing code or having your code reviewed.